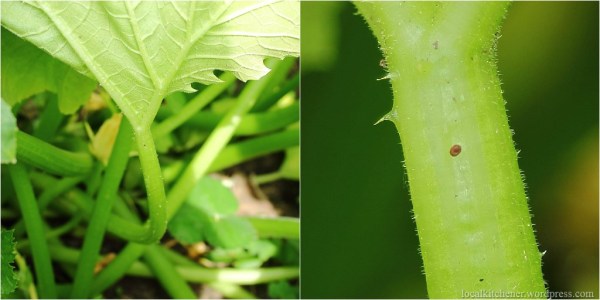 Gardening is a huge part of my life.  Gardening is also a source of tension in my life.  It brings me great joy yet often brings great sadness too.  I suppose it is a bit like children.  Well, maybe not quite like children, but the point is most of the time it makes my life better but every once in a while it makes my life worse.  Okay, okay, let me get to the point. 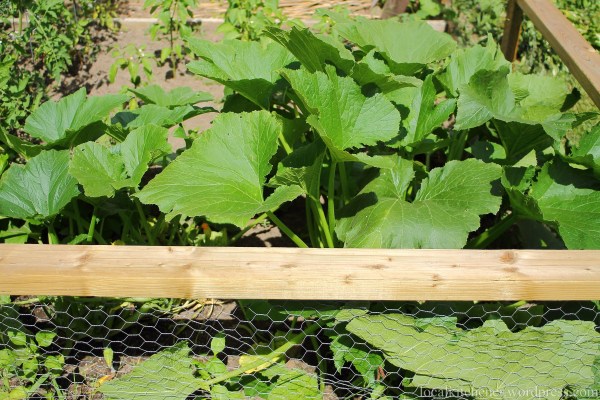 We came back from a weeklong holiday and found our garden growing wonderfully—the tomatoes were full of green fruits, the basil was huge, the squash were full of blossoms and even a few fruits, the peppers were beginning to show signs of life—but then I noticed something sickeningly familiar on the base of the zucchini plants.  I knew right away that I was looking at damage caused by one of my biggest nemeses in the garden, the squash vine borer, the larval form of Melittia cucurbitae, which is a moth that looks like a bee or wasp.  Anyways, as the name would suggest, the moth lays its eggs on random parts of hollow-stemmed squash plants (mostly summer squash and pumpkins, usually not winter squash), the babies hatch and burrow into the plant and have a wonderful party eating the plant from the inside out.  The gardener notices wilting plants and thinks that water is the problem only to water furiously and yet continue to lose the plant.

They’re beginning to wilt, but why? It just rained!

Years ago, while living in Atlanta, I noticed a mushy spot on the stem of one wilting squash plant and on closer inspection saw what looked to be sawdust coming out of a wound in the plant.  (I later learned this is called frass, and it is the waste created by the growing larvae).  I used a knife to slice open the vine and found at least 2 plump larvae!  I dispatched quickly with them and then proceeded looking for more.  This became a new pleasure of mine, taking revenge on the evil creatures in my garden.  Sadly it proved very difficult to grow summer squash in Atlanta because even when the vine borers were kept in check there were squash bugs that would suck the plants dry from the outside and several other bugs that would attack the fruits!

This is the early stages of damage to the base of the plant.

My current strategy for dealing with the problem is to start by just looking the whole plant over.  Then I check as many stems as I can for very small eggs.  I remove them and squish them.  Sometimes they are in groups but usually alone.  I then look for signs of frass.  Finally, if need be, I slice open the stem near the frass and look for any larva.  I remove move, both literally from the plant, and then euphemistically. 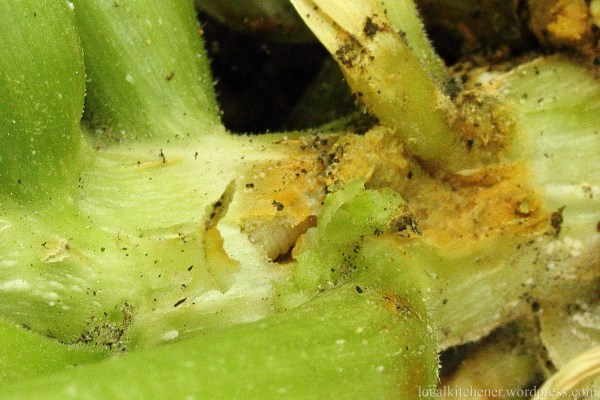 Look in the hole in the center, there’s something in there…

I have to say that I was excited to garden here in our new climate after moving to Kitchener this past winter.  I knew there could be vine borers here but really it seemed like they followed me from Atlanta!  My plants are surviving after I sliced open their stems to remove the little buggers but it still saddens me to think of how often garden becomes a battle.  How lovely it would be to just toss seeds out in some dirt, casually water them, take a stroll through the lush greenery and pick some fruits and vegetables for dinner…. Alas, life as a gardener is a bit more work than that.  On the other hand, I tend to enjoy a good challenge, at least when I feel like I can solve it.

The line down the middle of the stem is where I’ve been searching for larvae. 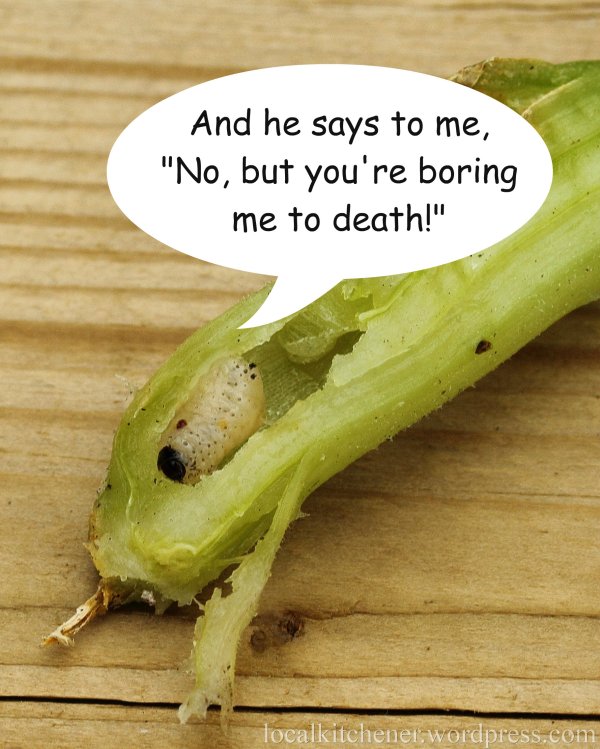 Thus life continues for me as a tension—struggle and perseverance, pleasure and pain, agony and ecstasy, you get the point—the good and the bad!  Luckily most of the time the good greatly outweighs the bad, especially when I taste those first fruits from each plant.  This is a great season, and gardening helps connect me to it!

Like all good stories, this one is to be continued…

This post originally appeared at Foodlink.ca, a great organization that works to connect consumers to local food producers.

Linking up at Tuesday Garden Party.

10 thoughts on “Attack of the Killer Squash Vine Borers”

My name is Jon and I'm always trying to do my best to eat local and live sustainably. I'm not a chef, but I love doing work in the kitchen!

What is a kitchener?

kitchen - er; noun;
1. A person who spends many parts of the day in the kitchen
2. A person who cannot quite be considered a cook but who nonetheless loves to cook and finds the kitchen the happiest place in the house.
3. A city in Ontario, Canada (and coincidentally where The Kitchener resides).